Nonlinear Dynamical Systems (NDS)
... is an umbrella term for the study of phenomena such as attractors, bifurcations, chaos, fractals, catastrophes, and self-organization, all of which describe systems as they change over time. There is a large variety of possible patterns and many interesting and useful interrelationships among these groups of constructs. Their origins are grounded most often in differential topology. SCTPLS is primarily concerned with how to apply them constructively to theoretical and practical problems in psychology, the biomedical sciences, organizational behavior and management economics, education, and elsewhere. Some of our members have been actively developing analytical methods, usually of a statistical nature, that can be used to test hypotheses with real data. Many of the ideas that we work with lend themselves to some precise yet provocative graphics.
Find Resources
Attractors
Bifurcations
Chaos
Fractals
Catastrophes
Self-organization
Emergence
Synchronization
Entropy
Agent-based modeling
Networks
Applications -- The Paradigm
Applications -- Psychology
Applications -- Biomedical
Applications -- Organizational Behavior
Applications -- Economics and Public Policy
Applications -- Ecology
Applications -- Education
Nonlinear Methods
Phase Space Analysis
Correlation Dimension
Surrogate Data and Experiments
Lypunov Exponent
Hurst Exponent
State Space Grids
Recurrence Plots and Analysis
Nonlinear Statistical Theory
Maximum Likelihood Methods
Markov Chains
Symbolic Dynamics
Glossary of Nonlinear Terms
by Terry Marks-Tarlow, Keith Clayton, and Stephen Guastello.
More Resources for Basic Dynamics
Attractors and boundary conditions, an interactive animation by Mike Solomon History of the BZ reaction produced by John A. Pojman. Nonlinearity in Physics Tutorials by J. C. Sprott. Videotaped lectures explaining the basic principles of nonlinearity in physics.
More Resources for Chaos
Introduction to Chaos by Larry Liebovitch. This online presention provides a rapid coverage of the basis principles of Chaos Theory in an illuminating set of Powerpoint slides.

Simple model of the Lorenz Attractor. [video]. Watch the attractor evolve and develop over time.

More Resources for Fractals
Introduction to Fractals by Larry Liebovitch. Presentation provides a rapid coverage of the basic principles of Fractals and Self-similarity in an illuminating set of Powerpoint slides.

More About Fractals and Scaling by Larry Liebovitch. This online presentation covers some of the basic dynamical underpinnings of self-similarity.

The Mandelbrot Set by Malin Christersson. An iconic fractal that can be viewed at different levels of scale with this interactive display.

More Resources for Catastrophes
The Catastrophe Teacher by Lucien Dujardin. An Introduction to catastrophe theory for the experimentalist. Explores all seven models in the set of elementary catastrophe models.

Catastrophe Machine prepared by the American Mathermatical Society, based on Zeeman's original.

Please scroll down for more links and their accompanying narratives.

Optimum Variability
A special issue of NDPLS (October, 2015) examines the relationship system complexity and the health, functionality, and adaptability of biomedical systems, individual well-being, and work group dynamics. See contents. Special order this issue.
More resources for agent-based modeling and related computational programs
On-line Guide for Newcomers to Agent-based Modeling in the Social Sciences Robert Axelrod (University of Michigan) & Leigh Tesfatsion (Iowa State University): The purpose of this on-line guide is to suggest a short list of introductory readings and supporting materials to help readers become acquainted with Agent-based Modeling (ABM). Sugarscape This is a simulated society developed by the Brookings Institution. It depicts agents interacting in their quest for sugar, and features cellular automata structures. See what happens when they can trade commodities, breed, and spread diseases.

SWARM Agent-based Modeling System -- Sante Fe Institute explains how the SWARM simulation system can be used to describe the self-organizing behavior of heatbugs, moustrap fission, and a small market with one commodity. Contains a portal to advanced materials for SWARM program users.

The Boids by Craig Reynolds. A simulation of a flock of birds developed by Craig Reynolds illustrates how a flock sticks together on the basis of only three rules. Other items on this site show similar properties for a school of fish, and reactions to predators or intruders. More swarms. More videos.

Emergence and complexity - Lecture by Robert Sapolsky [video]. He details how a small difference at one place in nature can have a huge effect on a system as time goes on. He calls this idea fractal magnification and applies it to many different systems that exist throughout nature.

More Resources for Synchronization
Synchronization of five metronomes [video] -- A reenactment of the phenomenon discovered by Christiaan Huygens which got the whole story of synchronization started. Note: This video automatically links to other excellent examples of Sync. Interpersonal Synchronization A special issue of NDPLS (April, 2016) examined a fast-moving research area about how body movements, autonomic arousal, and EEGs synchronize between dyads, such as therapy-client dyads, and larger work teams, and the effect synchronization has on various outcomes. See contents. Special order this issue SyncCalc 1.0 by Anthony F. Peressini & Stephen J. Guastello calculates a coefficient of syn-chronization from several beha-vioral or physiological time series that characterizes the global system. Prototyped for human group dynamics, the algorithm identifies drivers and empaths within the group. Be sure to read the instructions before downloading the program, which is available in PC and MAC formats. The two test data sets are .txt files.
More Resources for Networks
"An Introduction to Graph Theory and Complex Networks" by Maarten van Steen (2010; 287p., 6MB).

More resources for Applications -- Paradigm & Book Lists
Nonlinear Dynamics, Psychology, and Life Sciences is the refereed research journal of the Society for Chaos Theory in Psychology & Life Sciences. Since its inception in 1997, NDPLS is the only refereed research journal that is uniquely devoted to this range of nonlinear applications and related methodologies. See the journal's home page for contents, data base indexing, citation, editorial, and related information.

This special issue of Nonlinear Dynamics, Psychology, and Life Sciences (January, 2007) was devoted to the paradigm question as it was manifest in a variety of disciplinary areas. See contents. Inquire about availability.

The Impact of Edward Lorenz. Special issue of NDPLS (July, 2009) pays a historical tribute to Lorenz discovery of the butterfly effect, its mathematical history, later developments, and its applications in economics, psychology, ecology, and elsewhere. See contents. Special order this issue.

The Nonlinear Dynamical Bookshelf is a regular feature of the SCTPLS Newsletter (sent to active members) that presents announcements and brief summaries of new books on topics related to nonlinear dynamics. Contents are limited to information we can collect from book publishers or that crawl into our hands by any other means.

Open access book reviews: In an effort to help the world get caught up on its reading, NDPLS has made its book reviews published since 2004 free access on its web site. Browse the journal's contents to see the possibilities.

Books written by members of the Society for Chaos Theory in Psychology & Life Sciences. This list is as complete as we can get it for now, and it is updated regularly. Most are technical in nature. Some of these works go beyond the scope of nonlinear science. Some are whimsical. All are recommended reads.

Recent books by members is a sub-list of the above that lists only those books published with in the past four years.

More resources for Psychology
Chaos and Complexity in Psychology: The Theory of Nonlinear Dynamical Systems edited by Guastello, Koopmans, & Pincus (2009). This collection captures the state of the science of nonlinear psychology in application areas ranging from neuroscience to organizational behavior. For further description and ordering information see Cambridge University Press.

Interpersonal Synchronization. Special issue of NDPLS (April, 2016) examines a fast-moving research area about how body movements, autonomic arousal, and EEGs synchronize between dyads, such as therapy-client dyads, and larger work teams, and the effect synchronization has on various outcomes. See contents. Special order this issue.

Article: "Nonlinear Dynamics in Psychology" by S. J. Guastello. This open access article from Discrete Dynamics in Nature and Society, vol. 6, pp. 11-29, 2001 gives an overview of applications in psychology, except neuroscience, as they existed through early 2000.

Handbook on Complexity in Health, edited by J. P. Sturmberg & C. M. Martin (2013) offers over 1000 pages of viewpoints and research on medical thinking and practice, behavioral medicine and psychiatry from the perspective of nonlinear dynamics and complex systems. See table of contents.

Advanced Modeling Methods for Studying Individual Differences and Dynamics in Organizations. In this special issue of NDPLS, authors consider the possible uses of growth curve modeling, agent-based modeling, cluster analysis, and other techniques to explore nonlinear dynamics in organizations. See Contents. Editorial introduction. Special order this issue.
More resources for Economics & Policy
Complexity in economics edited by J. B. Rosser, Jr. The international library of critical writings in economics 174. UK: Edward Elgar. This 3-volume set (2004) compiles a wide range of important and fundamental works on nonlinear dynamics in all the areas of economics. Further description and ordering information. 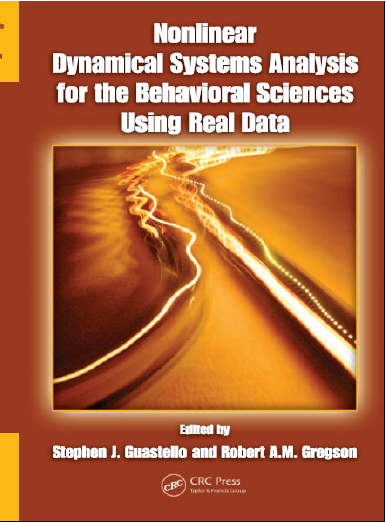